Ed Sheeran’s popular song “Thinking Out Loud” trends once again! This time it’s not because of its romantic meaning, but for its creepy second voice, which made the netizens freak out.

Some people say that it sounded like a voice of a child, while others believe that it was a voice of a ghost overlapping Sheeran’s. Well, before this thing scare the hell out of you, here’s what Facebook user Michael Vincent posted on his account, explaining what the sound really was and where it came from. 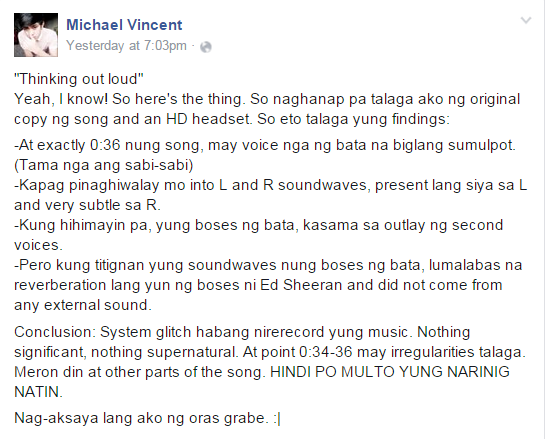 FACT: You would really hear a childlike voice on the 6th line of the first verse. Exactly at “Baby my HEART”…….

BUT: It’s just a technical glitch when the music was being recorded/ edited. There’s nothing supernatural.

The creepy sound was a result of enhancement made to the audio. The reverberation of Sheeran’s recording speculatively had a technical glitch while it was being edited. Some also say that it was a result of auto tuning, and others think he just lost his breath on that certain note.

So, forget those scary stories made about the creepy voice behind “Thinking Out Loud”. Ed Sheeran is definitely NOT an ALIEN!! It’s just an unwanted sound effect!

To know more about reverberation and how it affects speech and sound, tick this link below.
http://hyperphysics.phy-astr.gsu.edu/hbase/acoustic/reverb.html